Year three is when “it” usually “clicks” for young players in the NFL. The game slows down as the playbook becomes more like second nature than second language. Chicago Bears quarterback Mitchell Trubisky is entering year three in NFL. An argument can be (and has been) made that his rookie season was a wash for a myriad of reasons and that 2018 was his true inaugural campaign. Whatever. Ben Simmons should not have been eligible to win NBA Rookie of the Year and Trubisky doesn’t get a mulligan on a lost season.

Boxed By A Fox

2017 was rough for Bears fans. A lame duck coaching staff, a roster light on talent, and an enigma at quarterback. Trubisky limped through the year, handcuffed by his handlers (he actually had a game with only seven pass attempts). He finished the season completing 59.4 percent of his passes for 2,193 yards, seven touchdowns, and seven interceptions. His 32.4 Total QBR was good enough for…wait for it…34th in the NFL! Even his staunchest detractors have to acknowledge the negative effect John Fox and company had on the QB. 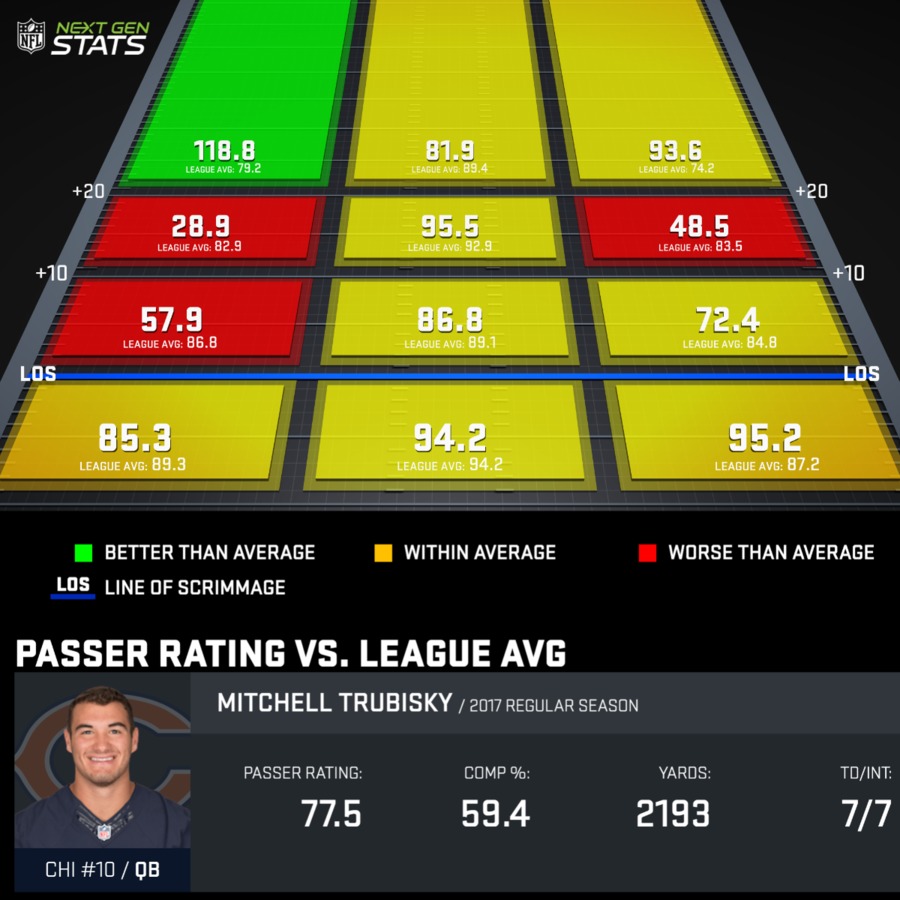 Following Fox might have meant that any coach would look like an offensive wizard. But Matt Nagy showed genuine glimpses of being just that. Trubisky’s numbers jumped as he finished with 3,223 yards, 24 passing touchdowns, and 12 picks while completing 66.6 percent of his passes. His Total QBR also skyrocketed to 72.8 (3rd), but that may actually be more of a reason to discount the stat than rally around it. His passing yards, while sixth on the Bears all-time single-season list, were only good enough for 20th in 2018.

Trubisky missed two games (weeks 11 & 12) and when he returned there was a clear adjustment from his head coach. The quarterback’s yards per attempt dropped from 7.69 over the first 10 games to 6.76 over the final four. His return game was especially rough. He completed 53 percent of his passes for 110 yards, one touchdown, and three interceptions. Now, that was against an eventual Super Bowl LIII contestant in the Los Angeles Rams and the Bears did win the game.

Still, after throwing 20 touchdowns pre-injury (aided by a monster six-touchdown game against the Tampa Bay Buccaneers, it was a mostly unremarkable end to the season for Trubisky. There were positives to be gleaned, though. Not the least of which being that the quarterback did not throw an interception over the final three weeks of the regular season. That matched the number of times he did that in the 10 games prior to his injury.

Through no fault of his own, Trubisky will forever be linked to the other two marquee quarterbacks in his class. Deshaun Watson cut his teeth first, setting the league ablaze for the Houston Texans before tearing his ACL. Where Watson had folks whispering of a possible MVP had he stayed healthy, Patrick Mahomes delivered. The Kansas City Chiefs passer matched Trubisky with 12 interceptions, but his 50 touchdowns were a whole different story. Often times, it seems people hold the Bears passing (or missing if you are cynical) on those two against Mitchell.

These quarterbacks can launch 'em deep.

For what it is worth, early reports out of OTAs are that the Bears signal caller is making major strides in the Nagy offense. That will need to manifest itself in-game in situations where, last season, Trubisky often struggled to progress beyond his first read. An underrated weapon as a runner, he would also take off quicker than desired at times. A second year in this system, bolstered by a full off-season with his teammates, should lead to a breakout from Trubisky.

Support of His Cast

The Bears success will hinge on the right arm of Trubisky, but it is not on him alone. As mentioned, he will have an entire off-season with his weapons, for the most part. Tight end Trey Burton is expected to miss at least most of the summer after having surgery for a sports hernia. Aside from that, they should be healthy. That includes their number one receiver, Allen Robinson, who has had nothing but positive things to say of his quarterback.

Bears are the most popular bet to win the Super Bowl 👀

An improved running game, presumably led by rookie David Montgomery, will also help ease the burden. That is, as long as Nagy stays committed to it. Of course, the offense will have to give him a reason to stick with it. The Bears had nine games last season in which they averaged less than four yards per carry. What makes it tough to make the case for more carries is the Bears 8-1 record in those games.

All the platitudes being bandied about in the summer are cute. But they hold absolutely no weight in the minds of skeptics. The proof needs to be on the field for Mitchell Trubisky in year three. Reality is the trade for Khalil Mack accelerated this team’s timeline and, kicking woes or not, there needs to be a massive jump in productivity from Trubisky. Scouring mediocre regular season performances and (less than) a half of a playoff game for rays of hope that he is the answer at quarterback is not going to cut it in year three.

(Comments, if enabled, are below this video.)


Warning: Use of undefined constant TDC_PATH_LEGACY - assumed 'TDC_PATH_LEGACY' (this will throw an Error in a future version of PHP) in /data/www/ms.lastwordonsports.com/wp-content/plugins/td-composer/td-composer.php on line 107

This site uses Akismet to reduce spam. Learn how your comment data is processed.